As of April 1st, 2022, Leadinfo is taking over the German company LeadingReports. An important step for the Rotterdam scale-up, as this is its first international acquisition.

Leadinfo is only a few years old, but the company has quickly grown and attained a top position in the market, with thousands of customers in the Benelux, DACH region, Great Britain and Scandinavia. With the largest dataset in the market, Leadinfo’s software recognises more business visitors in comparison to similar tools on the market. This data has allowed customers like Heineken, Simplicate and Channable to effortlessly fill their funnel with quality leads. In 2021, Leadinfo’s success was rewarded with a high ranking in the Emerce100.

Leadinfo and LeadingReports, one of the company’s oldest competitors in Germany, hold many similarities. Both companies value the relationship they have with their partner network. In fact, Leadinfo calls its network of +1100 partners a driving force behind it’s success. The main difference between both companies is their integrations. Currently, Leadinfo’s software integrates with more than 50 platforms such as Slack, Hubspot and Google Ads. So customers can effortlessly migrate and gain access to Leadinfo’s international database and get to work filling their sales pipelines.

If we are heading towards a cookie-free era,

Leadinfo does not want to be left behind. Last month we introduced cookieless tracking, which allows customers to choose whether they want to use cookies. So I am proud to see that we are taking the lead on the international playing field. And at the same time, it’s important to stay sharp and continue to build on the functionality and usability of our software.” 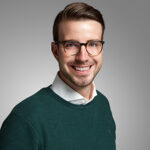 Leadinfo was named a G2 “Leader” in the category of Visitor Identification Software with over 300 positive user reviews.
Read more ›
Company news

Leadinfo will take over the Dutch company LeadElephant on January 14, 2022, after the acquisition of Leadexpress in December 2021.
Read more ›
Company news

As of December 31, 2021, Leadinfo will take over the Dutch company Leadexpress, thereby strengthening Leadinfo's position as market leader in the Benelux.
Read more ›